Our newest product is called NMN Octa 3000 because our NMN contains one key ingredient, Octacosanal, and we are confident to say the Richway NMN Octa 3000 will become the best NMN product on the market.

Creating safe products is a priority in biotechnology. UTHEVER NMN is the most stabilized, pure, pharmaceutical grade NMN on the market. NMN Octa 3000 combines Octacosanol, Pterostilbene, L-Arginine, and Isoflavones.

A Quality Life is not only about living longer, but also living a healthier life. With biotechnology, we can open the doors of longevity and challenge the reversing of aging.

History of Biochemistry - The coenzyme NAD+ was first discovered by the British biochemists Arthur Harden and William John Young in 1906. They noticed that adding boiled and filtered yeast extract greatly accelerated alcoholic fermentation in unboiled yeast extracts. They called the unidentified factor responsible for this effect a coferment. Through a long and difficult purification from yeast extracts, this heat-stable factor was identified as a nucleotide sugar phosphate by Hans von Euler-Chelpin. In 1936, the German scientist Otto Heinrich Warburg showed the function of the nucleotide coenzyme in hydride transfer and identified the nicotinamide portion as the site of redox reactions. Vitamin precursors of NAD+ were first identified in 1938, when Conrad Elvehjem showed that liver has an "anti-black tongue" activity in the form of nicotinamide. Then, in 1939, he provided the first strong evidence that niacin is used to synthesize NAD+. In the early 1940s, Arthur Kornberg was the first to detect an enzyme in the biosynthetic pathway. In 1949, the American biochemists Morris Friedkin and Albert L. Lehninger proved that NADH linked metabolic pathways such as the citric acid cycle with the synthesis of ATP in oxidative phosphorylation. In 1958, Jack Preiss and Philip Handler discovered the intermediates and enzymes involved in the biosynthesis of NAD+; salvage synthesis from nicotinic acid is termed the Preiss-Handler pathway. In 2004, Charles Brenner and co-workers uncovered the nicotinamide riboside kinase pathway to NAD+. 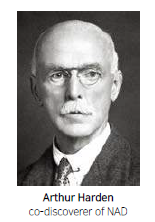 Physical and chemical properties - The compound accepts or donates the equivalent of H-. Such reactions (summarized in formula below) involve the removal of two hydrogen atoms from the reactant (R), in the form of a hydride ion (H-), and a proton (H+). The proton is released into solution, while the reductant RH2 is oxidized and NAD+ reduced to NADH by transfer of the hydride to the nicotinamide ring.
RH2 + NAD+ NADH + H+ + R;
From the hydride electron pair, one electron is transferred to the positively charged nitrogen of the nicotinamide ring of NAD+, and the second hydrogen atom transferred to the C4 carbon atom opposite this nitrogen. The midpoint potential of the NAD+/NADH redox pair is 0.32 volts, which makes NADH a strong reducing agent. The reaction is easily reversible, when NADH reduces another molecule and is re-oxidized to NAD+. This means the coenzyme can continuously cycle between the NAD+ and NADH forms without being consumed. 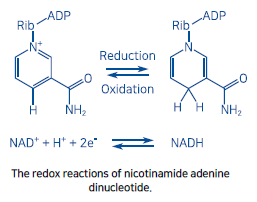 How is NMN Synthesized In the Body? NMN is produced from B vitamins in the body. The enzyme responsible for making NMN in the body is called nicotinamide phosphoribosyltransferase (NAMPT). NAMPT attaches nicotinamide (a vitamin B3) to a sugar phosphate called PRPP (5'-phosphoribosyl-1-pyrophosphate). NMN can also be made from 'nicotinamide riboside' (NR) through the addition of a phosphate group. 'NAMPT' is the rate-limiting enzyme in the production of NAD+. This means lower levels of NAMPT cause decreased NMN production, resulting in decreased NAD+ levels. Adding precursor molecules like NMN can also speed up NAD+production.

What's NMN? NMN stands for nicotinamide mononucleotide, a molecule naturally occurring in all life forms. At the molecular level, it is a ribo-nucleotide, which is a basic structural unit of the nucleic acid RNA. Structurally, the molecule is composed of a nicotinamide group, a ribose and a phosphate group. NMN is the direct precursor of the essential molecule nicotinamide adenine dinucleotide (NAD+)
and is considered a key component to increase NAD+ levels in cells. 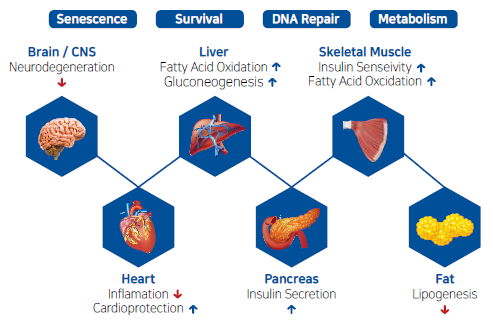 What is Nicotinamide Adenine Dinucleotide (NAD+)? NAD+ is an essential coenzyme required for life and cellular functions. Enzymes are catalysts that make biochemical reactions possible. Coenzymes are 'helper' molecules that enzymes need in order to function.
What Does NAD+ Do? NAD+ is the most abundant molecule in the body besides water, and without it, an organism would die. NAD+ is used by many proteins throughout the body, such as the sirtuins, which repair damaged DNA. It is also important for mitochondria, which are the powerhouses of the cell and generate the chemical energy that our bodies use.
NAD+ Functions as a Coenzyme in Mitochondria - NAD+ plays an especially active role in metabolic processes, such as glycolysis, the TCA Cycle (AKA Krebs Cycle or Citric Acid cycle), and the electron transport chain, which occurs in our mitochondria and is how we obtain cellular energy. In its role as a ligand, NAD+ binds to enzymes and transfers electrons between molecules. Electrons are the atomic basis for cellular energy and by transferring them from one molecule to the next, NAD+ acts through a cellular mechanism similar to recharging a battery. A battery is depleted when electrons are expended to provide energy. Those electrons can't return to their starting point without a boost. In cells, NAD+ serves as that booster. In this way, NAD+ can decrease or increase enzyme activity, gene expression, and cell signaling.
NAD+ Might Help Control DNA Damage - As organisms grow older, they accrue DNA damage due to environmental factors such as radiation, pollution, and imprecise DNA replication. According to the current aging theory, the accumulation of DNA damage is the main cause of aging. Almost all cells contain the 'molecular machinery' to repair this damage. This machinery consumes NAD+ and energy molecules. Therefore, excessive DNA damage can drain valuable cellular resources. One important DNA repair protein, PARP (Poly (ADP-ribose) polymerase), depends on NAD+ to function. Older individuals experience decreased levels of NAD+. The accumulation of DNA damage as a result of the normal aging process leads to increased PARP, which causes decreased NAD+ concentration. This depletion is exacerbated by any further DNA damage in the mitochondria. 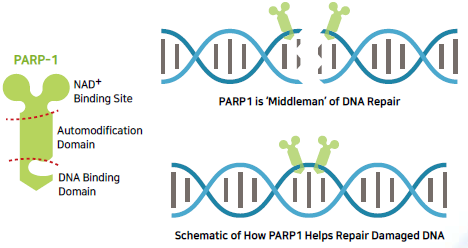 NAD+ is the fuel that helps sirtuins sustain genome integrity and promote DNA repair. Like a car cannot drive without fuel, sirtuins' activation requires NAD+. Results from animal studies showed that raising NAD+ level in the body activates sirtuins and increases the lifespans of yeast, worms and mice. Although animal studies showed promising results in anti-aging properties, scientists are still studying how these results can translate to humans. NAD+ is one of the keys to maintaining healthy mitochondrial functions and steady energy output. Aging and high-fat diet reduces the level of NAD+ in the body. Studies have shown that taking NAD+ boosters can alleviate diet associated and age-associated weight gain in mice and improve their exercise capacity, even in aged mice. Other studies even reversed the diabetes effect in female mice, showing new strategies to fight metabolic disorders, such as obesity.
How is NMN Synthesized In the Body? NMN is produced from B vitamins in the body. The enzyme responsible for making NMN in the body is called nicotinamide phosphoribosyltransferase (NAMPT). NAMPT attaches nicotinamide (a vitamin B3) to a sugar phosphate called PRPP (5'-phosphoribosyl-1-pyrophosphate). NMN can also be made from 'nicotinamide riboside' (NR) through the addition of a phosphate group. 'NAMPT' is the rate-limiting enzyme in the production of NAD+. This means lower levels of NAMPT cause decreased NMN production, resulting in decreased NAD+ levels. Adding precursor molecules like NMN can also speed up NAD+ production.
Methods to Increase  NAD+ levels - Fasting or reducing calorie intake, better known as calorie restriction, has been shown to increase NAD+ levels and sirtuin activity. In mice, the increased NAD+ and sirtuin activity from calorie restriction has been shown to slow the aging process. Although NAD+ is present in some foods, the concentrations are too low to affect intracellular concentrations. Taking certain supplements, such as NMN, has been shown to increase NAD+ levels.
NAD+ Supplement as NMN - Intracellular concentrations of NAD+ decrease from aging as normal cellular functions deplete NAD+ supplies over time. Healthy levels of NAD+ are thought to be restored by supplementation with NAD+ precursors. According to research, precursors such as NMN and nicotinamide riboside (NR) are viewed as supplements of NAD+ production, increasing concentrations of NAD+.
David Sinclair, a NAD+ researcher from Harvard, says, "Feeding or administering NAD+ directly to organisms is not a practical option. The NAD+ molecule cannot readily cross cell membranes to enter cells, and therefore would be unavailable to positively affect metabolism. Instead, precursor molecules to NAD+ must be used to increase bioavailable levels of NAD+. This means NAD+ cannot be used as a direct supplement, because it is not easily absorbed. NAD+ precursors are more easily absorbed than NAD+ and are more effective supplements." 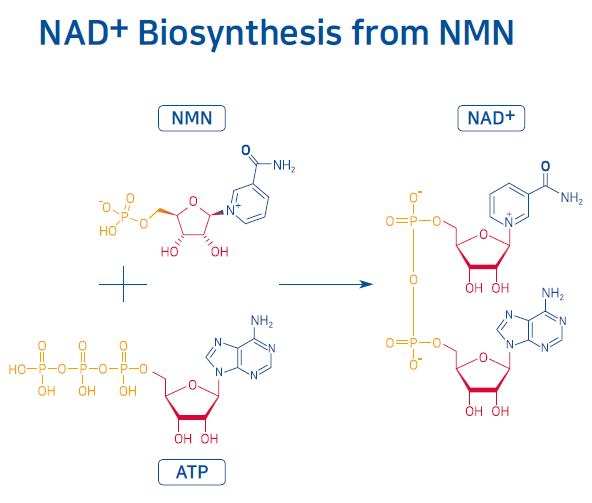